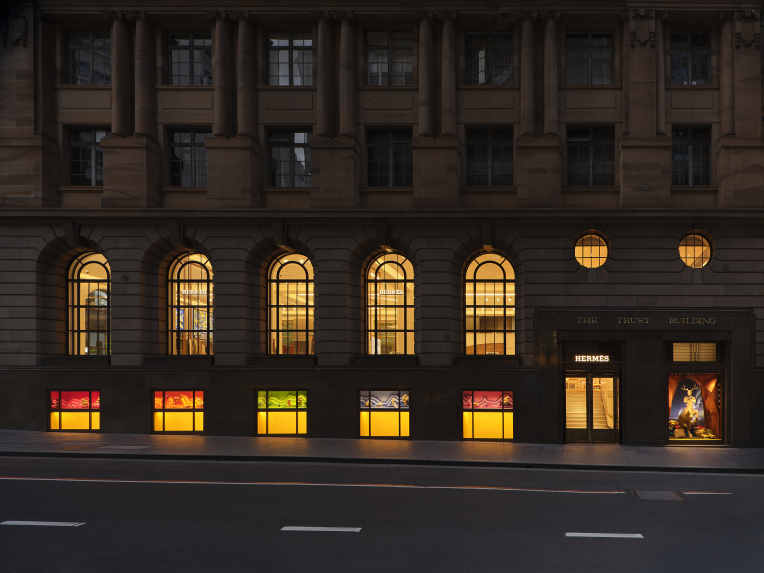 For the first time in Australia, this store will house all 16 of the company’s metiers, or specialties (including its newest, beauty).

Fancy an Hermès Apple watch? It’s there. A silk scarf? Bien sur. A jukebox? Pas de problem – here’s one, custom-made by Hermès Horizon, a small team within the company that creates bespoke items for customers with serious means (such as, for example, the interior of a private jet). There’s also a boombox, should a mood of ’90s nostalgia strike.

The exterior of the Trust Building, Hermes’ new Sydney home.

And of course, there is ready to wear, bags, costume jewellery, objects, homewares, high jewellery, even pet accessories. But none of this feels crammed – in the 800 square metre space (almost three times the size of the former Sydney boutique) over two levels, there is ample room for customers to stop, admire and shop.

It’s a feeling Montel was keen to convey when he set about designing the space following two “visits” to Sydney in 2018 – one virtual, the other, in person.

“The two things we wanted to focus on were the volume of the space and the flow of it. How will the people walk through the space? It’s a renovation trying to magnify the existing space and also a new structure.”

Creating pockets of intimacy – crucial when it comes to selling anything, let alone pave diamond necklaces that will easily set you back a few hundred thousand – can be difficult in grand spaces. The key, says Montel, is seamless separation.

“It’s not like a department store where everything is spread out. There are a lot of small spaces where the customer can sit, explore, discover. It’s almost like a home.”

Downstairs, for example, is a metal screen that Montel nominates as another favourite part of the store, and provides a subtle distinction between the men’s and women’s spaces. It was inspired, he says, by the glass partition that separates the store from the old lobby. “We tried to replicate this idea and to us, it looks quite natural. It’s a good balance between the 1930s architecture and the new.”

This fusing of the old and the new is important to Hermès, which, as Montel says, is “a modern company with contemporary product, but we have deep heritage. When we can send that message through architecture, it’s very interesting.”

The interiors of the store send that message, too, with original marble on the walls, cleaned to remove the yellow that accumulates with age. As you move to the depths of the first floor, there are vaults with lettering that has been gold-leafed as it would have been in the 1930s; a dumb waiter hidden behind a door; and even a fire hydrant in the window. All have been repaired and restored.

But progression, too, is important. Witness the enormous inverted plaster “chandelier” over the staircase, designed to mimic that structure’s shape, and the metallic fabric woven into the cabinets displaying high jewellery. Come at lunchtime and the whole thing dazzles like gold.

We are very happy when the customer says, ‘This is a nice place, this is beautiful – and it’s for me.’

Art, too, is key to the Hermès universe, and an opportunity for the past to meet the present, and for France to meet Australia. Two equestrian portraits from the Emile Hermès collection sit among the leather and scarves, and two harnesses – a nod to the company’s heritage in making saddles and bridles – bookend the entrance door.

Downstairs, there are four photographs from Australian artist Leila Jeffreys and a print of Indigenous artist Gloria Pettyar’s Le rêve de Gloria, which has been made into a scarf for the brand in various colourways since 2009. In the window that faces Castlereagh St, the work of French sculptor Julien Salaud is presented against a video installation backdrop, Borealis, by Australian photographer and videographer Murray Fredricks.

To celebrate the launch – officially, the store opened on June 13 – there will be several novelties available, including a special Birkin embossed with AM Cassandre’s Perspective in gold leaf. Having a souvenir of a city store is another signature of the house, and part of making the clientele feel that the store belongs to them.

“It’s important to design shops that work perfectly in the city,” says Montel. “It should be a place for the local community. We like to play with context, in a global way. We are very happy when the customer says, ‘This is a nice place, this is beautiful – and it’s for me.’”

It is a balance, he says, of knowing that the store is Hermès, but also fits the city’s needs. Meeting the city’s requirements, says Montel, is usually difficult, but in Sydney’s case was a breeze, something he is hoping will be a harbinger of good things to come.

“When the heritage architect from the city came for an inspection, there were quite a few items to discuss, but he validated everything.” He pauses for effect. “That has never happened for us before. He was so happy with the site, he just said yes to everything.”