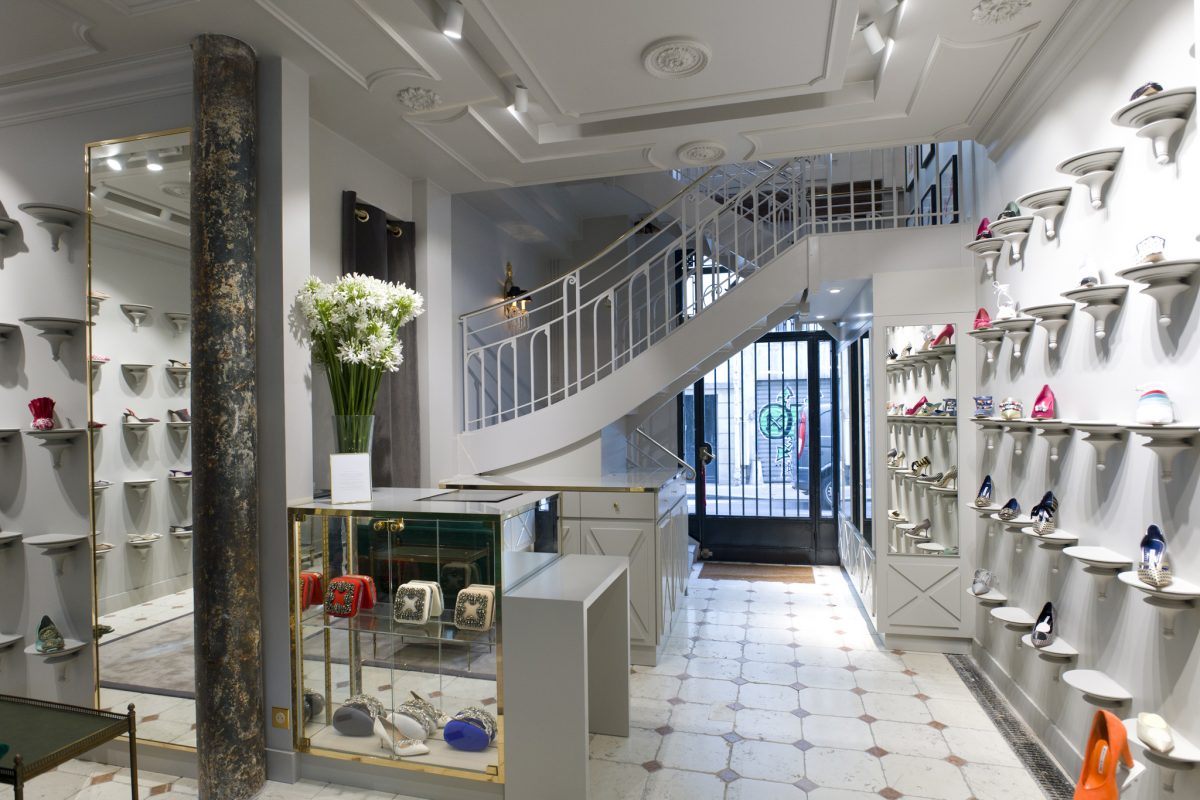 Manolo Blahnik has opened his first stand-alone store in the French capital inside the Palais Royal on a site that is close to his heart — and to the heart of the French Republic.

An aesthete fascinated by the past, in particular, the ancient world and the 18th century, Blahnik had long wanted to open a shop inside the Palais Royal, one of his favorite Parisian landmarks.

The site that he found, in Galerie Montpensier, is laden with history: It was the former location of Café Corrazza, where the Jacobins, including Robespierre, plotted to control the country during pre and post-Revolution France.

The store spans 479 square feet over two floors, with women’s on the ground floor and men’s upstairs. It maintains the café’s historic signage, with the name Manolo Blahnik featuring in discreet gold lettering on the store’s window.

“Paris is the most fabulous of cities in the world, especially architecturally — they have been very clever not to destroy landmarks,” said Blahnik, who designed the store himself, aiming for a “relaxed, salon” feel.

“Paris is untouched, pure and I have always wanted a store there, but it had to be in the Palais Royal. It is one of the most beautiful places and I love it — perfect proportions, and filled with so much history,” he said.

In an interview, chief executive officer Kristina Blahnik said the brand is proud to be “in residence” at Café Corrazza and to be part of the history of the Palais, which today houses a mix of fashion brands as well as antique, vintage and specialty collector shops. Previously, the Manolo Blahnik site had been home to temporary stores and pop-up shops.

“It is the perfect location, with so much history created there,” said the CEO, who described the Palais as “the outdoor living room of Paris.”

The wood-framed windows of the façade have been painted dark gray, and they showcase the designer’s shoes on wooden stands.

The interior is pale gray and features molded ceilings, an original curved staircase, plaster shelves and 100 Georgian floor-to-ceiling wall sconces designed by Peter Hone on which the shoes are displayed as if they were pieces of art.

The tiled flooring is original, as are the 16th-century marble columns, which were rescued from a Normandy church that collapsed. There are antique coffee tables, two imposing custom-made green velvet sofas, gilt-edged display cabinets, and mirrors.

Upstairs, the men’s space has been fitted out like a gentleman’s club, with mahogany-clad walls and modular doorlike panels edged in polished brass that swing down to display the shoes.

Two original chairs by Svend Aage Eriksen in rosewood and black leather allow visitors to look out of the rounded window and onto the Palais Royal gardens.

The designer’s first stand-alone store in Paris is located on the site of the historic Café Corrazza.

The designer has created 10 new women’s designs exclusive to, and designed especially for, the boutique with silk brocade and ruffles, covered buttons or opulent fluffy trims.

The Palais Royal unit is the brand’s 20th stand-alone store globally. Until now, the company has only had shops-in-shop at Printemps and Maria Luisa in Paris. It is also the first time men’s shoes are being sold in the city.

Kristina said the pressure was on to deliver a special space in Paris, as the city is the capital of fashion and also the former home of her uncle, who had spent several years thereafter living in Geneva and before making his final move to London.

The store is part of a steady series of openings worldwide for the brand, with the next unit planned for Asia later this year.