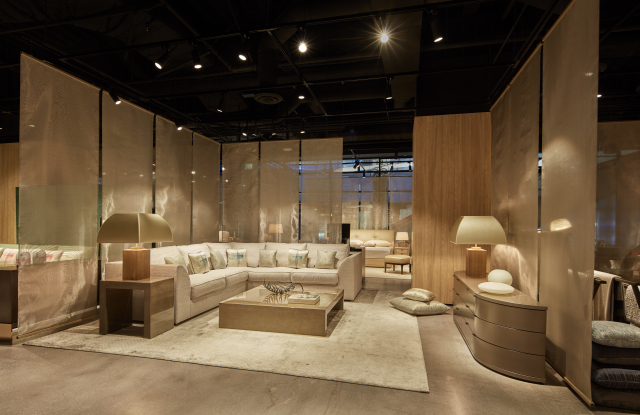 The Giorgio Armani Group said Wednesday that it is opening two additional retail units for its furnishing and interior design line, in Los Angeles and Vancouver.

A relocation from the existing space inside the city’s Pacific Design Center, the new Los Angeles outpost, which covers 5,274 square feet, counts nine windows and was designed to reflect the new Armani/Casa store concept that debuted in 2017 at the line’s Milan flagship on Corso Venezia.

Platinum metal mesh filters the light coming from the windows and divides the space inside the store. Products are showcased on minimal, clean displays crafted from durmast wood, which was employed also for panels covering the walls on the ground floor. They are also decorated with the silhouette of Armani/Casa’s signature Logo Lamp, which was launched in 1982.

Both units will carry the entire range of Armani/Casa’s offering, including furnishing, lamps, accessories, carpets, wallpapers and fabrics.

Armani/Casa was launched 18 years ago. Since 2003, the Armani/Casa Interior Design Studio has provided complete interior design services to private individuals and property developers.

Beijing’s Smart Hero-Central Park Plaza; the Maçka Residences in Istanbul; The World Towers in Mumbai, India, and the Century Spire in Manila are among the Armani/Casa Interior Design Studio’s most recent projects.